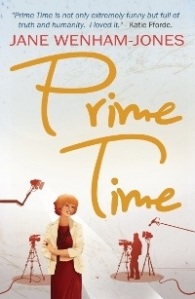 “LIGHTS. CAMERA. ACTION. That was the old Hollywood call that went out in the LA studios and for anyone who has agreed to do a television interview, it still rings true today.”

So says Glenn Campbell, a TV journalist who came to film me at home for the BBC’sInside Out. I became an instant fan of Glen when he rooted around the house for a small lamp which he placed strategically at my feet. “You look 30, darling,” he emailed later, when the edit was in progress.

I was pleasantly surprised myself. There was one slightly saggy-jawed shot at the beginning where they’d panned in too close but even my son (who was cringing and keeping a weather eye on Facebook in case his friends had seen me) admitted, when it hit the screen, that I looked “OK”.

Praise – as other mothers of teenage boys will know – indeed.

Glenn, I decided, would therefore be a good person to quiz on the finer points of looking half-decent on TV. And you can read his full words of wisdom in my guide to self-promotion Wannabe a Writer We’ve Heard Of? (http://www.amazon.co.uk/Wannabe-Writer-Weve-Heard-Of/dp/1906373973/ref=pd_sim_b_3)

But this was the bit that resonated with me – and which I’ve experienced to my cost.

“Good lighting makes you look good. It can add years to you, or it can flatter you beyond all recognition. It can make you look like a movie star. Why do you think they insist on seeing how they look when lit? After all, you may have a baggy chin, but a good lighting cameraman can make it vanish!”

I hope he wasn’t thinking of my own chin when he said that! But it was this undeniable truth that I had in mind when I started writing Prime Time. Laura’s story is very different from mine but let us say I empathise with her…J

Laura Meredith never imagined herself appearing on TV, she’s too old, too flabby, too downright hormonal, and much too busy holding things together for her son, Stanley, after her husband left her for a younger, thinner replacement. But best friend Charlotte is a determined woman and when Laura is persuaded on to a daytime show to talk about her PMT, everything changes. Suddenly there’s a camera crew tracking her every move and Laura finds herself an unlikely star. But as things hot up between her and gorgeous TV director, Cal, they’re going downhill elsewhere. While Laura’s caught up in a heady whirlwind of beauty treatments, makeovers and glamorous film locations, Charlotte’s husband, Roger, is concealing a guilty secret, Stanley’s got problems at school, work’s piling up, and when Laura turns detective to protect Charlotte’s marriage, things go horribly wrong. The champagne’s flowing as Laura’s prime time TV debut looks set to be a hit. But in every month, there’s a “Day Ten” …

Jane is the author of four novels and two non-fiction books – Wannabe a Writer? – a humorous look at becoming a scribe  – and Wannabe a Writer We’ve Heard Of?  a guide to the art of book and self promotion.  As a freelance journalist she has appeared in a wide range of women’s magazines and national newspapers and writes regular columns for Woman’s Weekly and Writing Magazine, where she is the agony aunt. Jane is an experienced tutor who is regularly booked by writing conferences and literary festivals to run workshops and give talks on all aspects of the writing process. She is also a member of Equity, has presented for the BBC on both TV and radio and has done her fair share of daytime TV, particularly when promoting her controversial second novel Perfect Alibis (subtitled How to have an affair and get away with it…) It was those – sometimes hair-raising – TV experiences that inspired Prime Time, her new novel. For more information see http://www.janewenham-jones.com and http://janewenhamjones.wordpress.com/.